I love to workout. It’s my form of meditation and it keeps me fit. It’s also what keeps me and my lifestyle healthy. A healthy lifestyle is not just what you are eating- it is what you are doing to stay physically active as well. After a workout though, it is VERY important to eat something, or drink a smoothie, to help rebuild those muscles you just pounded on, as well as replenish the electrolytes you just used during your workout. The best time to eat something is right after the workout- up until an hour after. I know- many people aren’t starving after coming back from the gym, a run, or whatever it is you do, but your body will thank you in the long run for it. You need to get certain nutrients in your body to help your body after working out.

Proteins help your muscles rebuild and recover from a workout.  Your muscles do not receive the full benefits of growing if you are not eating proteins 20-60 minutes after any sort of workout, and you have a higher chance of pulling, ripping, or tearing a muscle when not consuming enough protein afterwards.  Proteins that are good include- Eggs; Cheese; Fish- Tuna, Salmon, Halibet; Chicken/Turkey breast; Greek Yogurt; Nuts and nut butters.

Potassium helps restore electrolytes in the brain- which regulate our nerve and muscle functions.  Potassium also helps regulate the heartbeat after raising it, as well as helps the body retain calcium, which is necessary for the bones to remain healthy and not break.  Potassium products that are good choices include- Bananas; Avocados; Fish- Salmon; Dark leafy greens- Kale, Spinach, Collards; Coconut water- which has a natural source of electrolytes and is better than any sports drink to consume after a heavy workout.

It is necessary for your body to consume these nutrients to fully benefit any workout you have just done.  Because I know how it feels not to be hungry for a full on meal after hitting the gym or class, I have posted my favorite post-workout smoothie below.  Not only will give you the nutrients your body needs, it will refresh you after being physically active and it tastes DELICIOUS!

Makes enough for 2, or for one big smoothie that will keep you full for hours!

1/2 Avocado- For the smoothie to be extra smooth

Blend together in high speed blender.  Start on a low and add speed.  Blend until fully smooth. 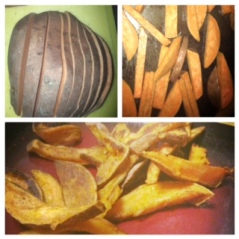 I love, love, love potatoes- especially french fries.  I use to get them as a side every time we went out for dinner.  However, I do know how they really are not the healthiest of choices considering potatoes do not contain the best nutrients for our bodies.  In fact, they are a starch which, when consumed, turns into glucose and triggers an insulin response in our bodies.  In other words- potatoes are a simple carbohydrate (sugar); or, as most people would understand, the bad carbs most try to avoid.  So, next time you want that potato, reach for the sweet potatoes instead.  They are more beneficial to the body, and they are super delish!

Loaded with vitamins- High in B6- which can help prevent heart attacks; good source of Vitamin C- which helps ward of cold and flu viruses, as well as produces collagen to help maintain your skin’s youthful elasticity, and Vitamin D- which is primarily found in sunlight- so during those winter months when people tend to be sunlight deficient, load up on some sweet potatoes to help with energy levels and moodiness.

Sweet potatoes also have good sources of minerals such as Iron; Magnesium- which can help you de-stress and relax; and Potassium.

Last night when I really wanted to have french fries, I made these baked sweet potato fries instead, and they satisfied every taste bud on my tongue!  Try them next time you are craving those plain, old, boring french fries!

1 Large Sweet Potato- Peeled if you want- I like the skin, so I did not peel- sliced into fry shaped pieces

1 Teaspoon, or a little less depending on how much spice you like, Ground Cumin

Dash of salt and pepper

With seasoning and ready to be baked!

Making your own foods is easy and not always time consuming.  Try it tonight- you may be surprised and continue cooking on a weekly basis!

Remember to always eat for your body~ it will thank you!

I absolutely love my CSA, but lately we have been getting way more than we can eat.  It upsets me when I throw away veggies that we just could not use before it went bad, so this week I told myself we would try to use all of it so I do not waste more food.  Yesterday we had gotten three big cucumbers and I really did not want to just cut them all up and add them to a salad in hopes we would eat it every night, so I decided to make a Greek Tzatziki sauce and make chicken and tofu gyros for something different for dinner!  The recipe is so easy and so delicious that it will definitely be made again.

1 big cucumber- peeled (or partially peeled), deseeded, and diced- I had about 2 cups 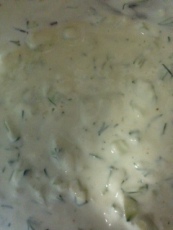 ~When you make your own foods you know exactly what you are eating, and for that your body will thank you. Remember to always eat for your body~

The last week and a half have been one of the hardest times I have ever had in my life. My best friend of 18 years passed away in his sleep. He was 30 years young. When I found out, I was devastated- I lost my best friend. He was someone that had been there for me since I moved to Westchester at 13, and someone that knew me inside and out. Maybe better than I knew myself at times.

When you are in your 20’s and 30’s, you don’t think about death striking a friend. Especially death of natural causes. When it does happen, emotions that you may not have even known existed come out and get the best of you. As shocked as I was, I was in denial. I knew he had passed, but the days leading up to the funeral I thought he would come back- like a joke and say “surprise, I’m here!” That never happened. The funeral came and so did the burial- where we had to face reality. This was the worst day of my life. Burying my best friend that I thought I had more time with was not something I had ever thought about. I went to his family’s house the next day where they were sitting shiva and got to hear stories about him I never knew about. Then stories I had heard over and over again, I felt as if I was there. I then heard stories that were so closely related to my own memories, it made me happy to know he wasn’t just a certain way with me. It was everyone.

It was a time to remember him.

With everything done, and him being gone, I think about it constantly.

I have always heard about the stages of grief, however I never had truly experienced them until now. I definitely had hit all five phases, however I felt them at different times and not in the order you always read about.

When I first found out, I of course was shocked. But I guess you can say I was was in denial as well. I didn’t want to believe my best friend was gone. Therefore, telling myself he was going to reappear even though I knew that was not the case. I did not want to see anyone. I didn’t want to talk to anyone about it. I just wanted to believe like it never happened.
Then came the bargaining. What if he had gone to the doctor? What if he didn’t work late the night before? What if this and what if that are questions we all face, but when it comes to reality we have to believe that his time was up and no matter what, he was going to be taken from us on this particular day.

The day of the funeral, and for days after, I was angry and depressed. I took my anger out on those who love me, including my husband. Not purposely, but I just didn’t want to talk to anyone. I didn’t want to see anyone. And I didn’t want to deal with anything or anyone. I was depressed and it showed through the anger and the fights I was causing for no reason.

Acceptance was the hard one for me. I didn’t think I could accept that my best friend was really gone. A week after it happened, my husband and I had to leave for a pre-planned trip to Lake Placid for a lacrosse tournament my husband was playing in. Thursday, there were no games so we went with friends and explored the town. We went to the gorge, learned some amazing facts and also got to walk a nature trail. I have never seen my friend’s son so happy before. We went to a hockey game and hung out with good friends that night at the house we were sharing with them. Lacrosse games the next day were fun and so was the fishing we did inbetween the two games. Being around friends helped me with the final step. I was starting to accept my best friend was gone.

It will take me a long time, I think, to finally accept it fully, but being around others who love me and I love back definitely helps.
I am not writing this for people to feel sad for me. It’s actually the opposite. I want people to know that these feelings are natural and will happen. It does not make you a weak person for crying, it makes you a stronger person. It’s okay to talk about it. To write about it- which in my case was easier than talking. To be open with your feelings. And if you can’t, it’s okay to seek help from someone that can help you face the feelings you have.
Things happen in life for a reason. Whether we understand it or not at the time, we will be able to pick up the broken pieces and move on.
It is healthy to have feelings of depression, anger, shock, bargaining, wanting to isolate yourself, etc. It is, however, unhealthy to keep these feelings bottled up. Talk about it with a loved one, or a professional if you feel it is necessary. Get out and do something. A walk in nature, a trip away with friends, meditate- these things can help you relax your mind and accept whatever it is you have lost.
When you can let go of the negative emotions, you can start thinking and being positive again. And for that your body will thank you. And remember, just because you have accepted something doesn’t mean you have forgotten your history with that person, or whatever it is you’re grieving, it just means you can move on with your life with great memories of those you have loved. And that is what my friend would have liked me, and everyone else close to him he left behind, to do.